When the Beatles came to India by Ledevoir

Yves Ouellet in India shares In 1968, the Beatles went to India for a strange pilgrimage to the Maharishi Mahesh Yogi Ashram with their wives and twenty friends, including Mia Farrow, Mike Love of the Beach Boys, flautist Paul Horn and Donovan Leitch, who composes “Hurdy Gurdy Man”. A little over 50 years later, Rishikesh remembers …

Since the passage of Fab Four and Company in the first city that crosses the Ganges River, Rishikesh has become the world capital of transcendental meditation and yoga. As soon as you approach the first bridge suspended by the footpath along the sacred river, we feel the urban frenzy win us. Temples in restoration, the ashrams recycled in meditation campus, the dilapidated buildings which appear in academy of yoga are multiplied .

In the streets punctuated with narrow shops circulates an oppressive human tide. The jeeps darken without concern. The tuk-tuks smoke and fart. The rickshaws make their way. The motorcycles sneak in honking with their two or three passengers. The cows snooze while chewing on their mantra and their dung is waiting for the foot. The hirsute beggars ( sadhus ) wrap themselves with an air of sanctity. It’s like being in a prolongation of the “Peace and Love” era by crossing hippies, young and old, on their clouds.

The craze for India

When one is old enough to have lived the Beatle mania (which is my case) and one remembers the so-called mystical stay of the four boys in India, one understands the importance that still had this trip in their music, especially in the creation of the fabulous ” White  Album “. According to John Lennon, Paul McCartney and he wrote about thirty songs during their seven-week stay. Over a dozen solo for Paul and six for George Harrison, so 48 in total. This was their most prolific creative period.

This experience brought India up to date and all the youth dreamed of going there singing Hare Krishna as George. The world began wearing exuberant shirts, meditating on fingers and sniffing incense while listening to Ravi Shankar. A real revolution!

The Maharishi’s International Academy of Meditation, also known as Chaurasi Kutia Ashram, trained thousands of meditation and dissertation teachers before its closure in 1997. The 57,000- square- meter site was a self-sustaining small town. dozens of bungalows, several apartment complexes, large service buildings and 84 cone-shaped stone shelters, in addition to underground shelters where the faithful took refuge for their prayers.

Surrounded by fortifications, the abandoned Ashram has become part of the Rajaji National Park Tiger Reserve territory, which is home to the invading vegetation of the rainforest and looters who have wreaked havoc on it. However, it has never ceased to welcome international visitors, the guards closing their eyes for a few rupees.

In April 2012, a young Canadian graffiti artist, Pan Trinity Das, created 10 pictorial works on the walls of the ashram, generating new interest from the media and the public. So that, in the face of tourist pressure, the state of Uttarakhand finally perceived the potential of the place in 2015, then undertakes serious work of deforestation and cleaning, which led to the official opening of the site. January 2017.

It is surprising today to see many young visitors immersing themselves in the nostalgia for an incomparable time that shaped the culture of their parents and grandparents. The Val-Jalbert of transcendental meditation presents only a succession of quasi-ruins under the shade of tall trees. The murals of Pan Trinity Das remain the heart of the visit.

What surprised me the most was the round stone shelters along the entrance path. Others, grouped, had to enjoy the view of the Ganges, while some, certainly quieter, are contiguous in tunnels. Despite the s o briété places, prevails here a wonderful magic that drink probably our childhood memories , but obviously proves contagious for generations that do not have these references.

Rishikesh, it is also India with its compact crowds, its incessant din and its striking smells that sometimes make believe that nirvana has a little infernal side. In this context, masses of Indians converge here on pilgrimage and thousands of Westerners come to learn yoga and meditation, or perfect their practice of these disciplines.

The unmissable event is the religious ceremony ( Ganga Aarti ) that takes place daily at sunset, under the triumphal arch of the city’s main ashram, Parmath Niketan. On the steps of the monumental staircase facing the Ganges, musicians and singers perform religious songs ( bhajans ) honoring the goddess Maa Ganga, taken up by the young people who study the Vedic texts.

Simultaneously, priests perform a purification ritual ( hawan ) by throwing incense handles at the fire. Finally, after lighting lamps and a short sermon, the public is invited to place on the Ganga small containers of flowers in front of a huge statue of Shiva.

As long as you are in Uttarakhand, you can enjoy a totally new outdoor experience at the source of the Ganges. Where pollution does not yet affect the sacred stream. Immediately after crossing the nearby town of Rishikesh, the water quality level apparently passes from A + to D-!

The great specialty of Aquaterra Adventures and its magnificent hotel, Atali Ganga, is rafting. In addition to trekking and a bit of mountain biking. The three activities are on the agenda of the hostel, in addition to yoga sessions and a visit to Rishikesh. The rafting conditions on the Ganges source are classified as “easy”, with rapids that barely exceed level 2.

The stay in Atali also has an unforgettable hike on a high ledge of the Ganges, along a thousand-year-old path used by pilgrims. We complete this “triathlon” with a very exciting downhill mountain biking on a small spectacular and dramatic road overlooking the emerald waters, before undoing our way rafting or inflatable kayak. It was during this navigation that some could admire a large male leopard that moved on the shore.

Every afternoon, the logistics team that follows us serves a meal of Indian specialties on the beach. Delicious and possibly destabilizing. I experienced one of the craziest moments of my life while, while we peacefully savored our dinner on our camping chairs, we were attending a cremation ceremony on the other side, the residents of the nearby village burning on the to burn the body of their deceased priest.

Atali Ganga’s facilities are located on an escarpment that dominates a grandiose section of the Ganges. It offers accommodation in small comfortable air-conditioned cottages and has a large swimming pool. The cuisine offers a varied Indian cuisine and homemade appetizers for the aperitif around the campfire. 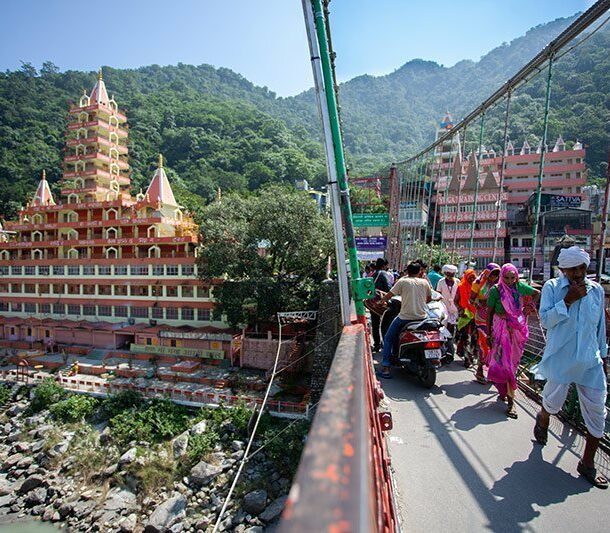 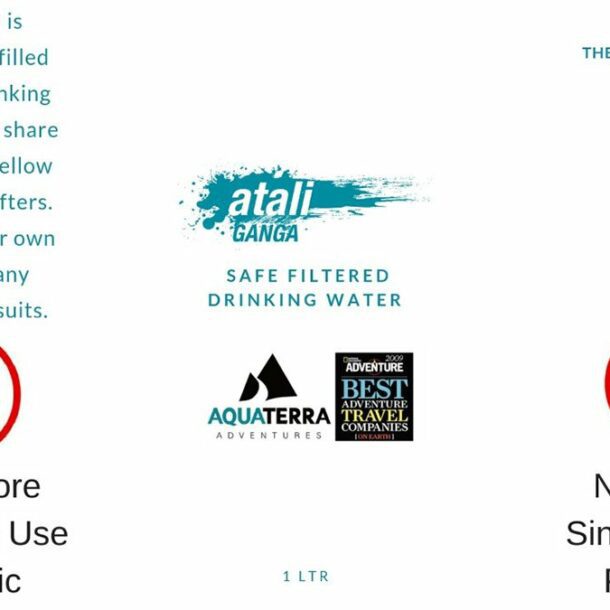